Let’s look at the grip angles of several different pistols.

John Moses Browning’s  1911 is widely considered the gold standard here in the USA when it comes to naturally fitting your hand and pointing at the target.  It has a grip angle of ~18* off of square. 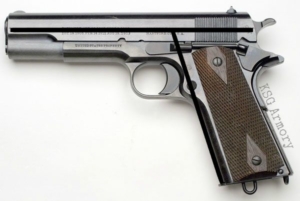 When Gaston Glock designed the G17, he gave it a grip angle of ~22* of off square.  If you could leave your grip in the exact same position and exchange the 1911 for a Glock, you’d be aiming high.  But measuring from the front of the grip really doesn’t tell the whole story, you really need to account for the hump at the bottom rear. 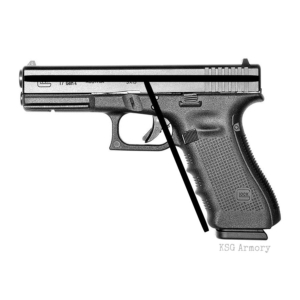 The Ruger series of Mark I, II, etc. are really raked at ~55*, along with the bullseye competition pistols. 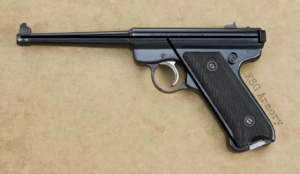 Let’s start with the bullseye pistols: the extreme angle to their grip seems to be due to the fact that they are often used with just one hand.  While many people comment that it’s an extreme angle for the grip, none have ever complained to me that “it just doesn’t work”.  In fact, they usually say “it’s weird, but it shoots well”.  From project Gutenberg comes a print showing how shooting often used to be done: 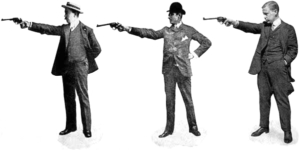 Over time that morphed into this: 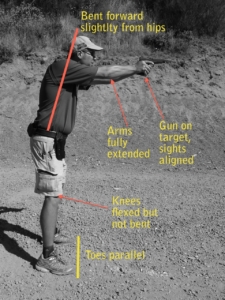 Wow, that’s quite a difference in stance!  Going from one hand to two does make a serious in how much angle you can stand in the pistol grip, because the support hand must roll forward.  If the dominant hand is already maxed out forward, then the support hand can’t surpass it.

The other critical factor is how upright the shooter’s back and head are; if you’re totally upright and relaxed, your pistol will be at a different angle than if you’re leaning forward and hunched down.

But 4* difference?  It’s just not that big of a deal.  After a lot of informal polling, I’ve concluded that what people think is natural is actually learned.  Most people don’t know why they like something, but that doesn’t mean that there is no reason.  As a martial artist who has learned multiple ways to punch, the one thing that I’m convinced of is that the human body is very adaptable.  Unless you have a physical limitation such as a broken wrist that no longer has full range of motion, you can adapt quite easily.  Far more important than grip angle, is the grip size.  For example, I just can’t get my hand around a G20/21.  A mouse gun such as a P3AT is just as bad for me – it’s simply too small.

I haven’t found any evidence of a skeletal grip angle that must be adhered to, as the wrist is “floating” in the middle of its’ range of motion, it’s not locked in.

Sure, if you really want you can change the grip angle.  But first, work on the Indian.  The arrow is less important.  You might find that once you increase your skill level, grip angle is really just gripe angle.

So if the exact grip angle of a pistol isn’t critically important, what is?  In no particular order:

So run your list of pistol choices through that matrix and then train with whatever you choose.  Train a lot.  Shooting one box of ammunition once every month or quarter is not training!  Take a class, do lots of dry practice, and you’ll find that little quibbles like the grip angle just don’t matter anymore – with one caveat: it’s only true if you use the same type of pistol.  If you carry a 1911 one day, a Luger the next, and finish the week with a Glock… you will probably have trouble with the grip angles.  Pick one and stick with it for the majority of your training.

Have you found that training overcame your aversion to a particular grip, or did you just have to revert back to your original choice?  I’d love to hear your thoughts and find out what has worked for you.