The internet has been telling me for years that I'll shoot my junk off if I persist in the foolish fad known as appendix carry.  I finally went looking for some data on appendix carry accidents, and while it's a fairly small sample size, I think it's enough to shed some light on who is most at risk for shooting themselves. 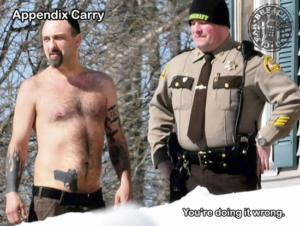 First, a confession: I've been carrying aiwb for about 8 years, so I'm admittedly biased.  However, I didn't leave off any links that involved appendix carry, and if you know of one that I missed, please leave a comment and I'll add it.

There are, broadly speaking, four categories to these self inflicted shootings.

In conclusion, yes, you might shoot yourself in the junk.  Thankfully the odds go way down if you're not drunk, or stupid, and use good gear.

If you know of any stories that I missed, especially ones that might fall into a different category than what I presented, please comment and let me know.