KSG was founded on the core idea of making quality holsters with exceptional customer service. Today we continue to focus on those core ideas, building the most functional, effective, and comfortable holsters in the marketplace and providing them at a competitive price.

KSG, which stands for Knowledge Skill Gear, is intended to communicate the importance of prioritizing your budget and your attention on mindset, education, and shooting skills, ahead of gear. While quality gear of course matters it never makes up for a lack of knowledge or skills.

The "Snake" that makes up the letter S in the KSG armory logo is based on the Political Cartoon published by Benjamin Franklin initially in 1754 as a call to unite against the French in what would become the French and Indian War. The image of the segmented snake would later take on a unique virality among colonists as calls to war and independence sounded in the early to mid 1770s. 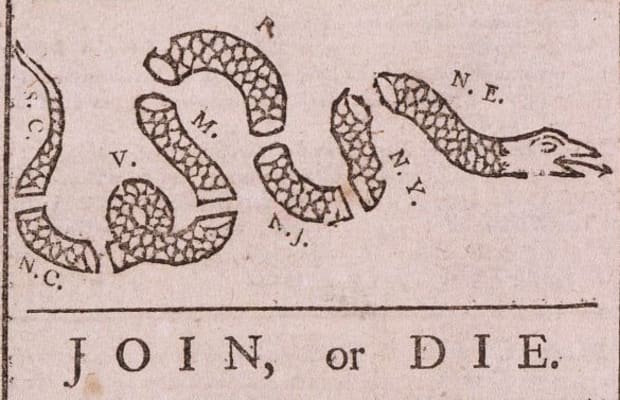 Join or Die was the original slogan printed along with the emblem of the segmented snake and it continues to be a reminder today of the importance of being united in the cause of freedom.

Later in 1775 Benjamin Franklin wrote an essay entitled "The Rattlesnake as a Symbol of America" in which he told why he believed the rattlesnake would be a good national symbol of America. "her eye excelled in brightness, that of any other animal [...]. She may therefore be esteemed an emblem of vigilance. She never begins an attack, nor, when once engaged, ever surrenders."

The snake in the KSG logo then stands for a number of things. First is being united in freedom. Next is awareness and vigilance; key elements in the proper mindset of any concealed carrier. Next is the mindset of a defensive attitude. To never begin an attack, but to only engage in one's defense. Lastly, the importance of a mindset of absolute determination to prevail in the fight. To never surrender once engaged.

We can't exactly embody all those things directly into the literal holster but we hope the logo will serve as a reminder of those important qualities.