Recently, I read this article about printing.  I wish I could agree with them, but it’s wishful thinking, basically treating a gun as a magical talisman. 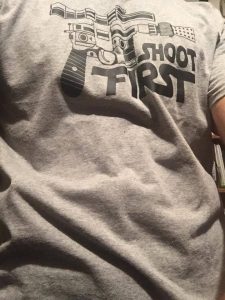 Certainly, not everything he says is wrong.  That initial nervousness of going out in public with a concealed weapon is pretty much universal to concealed carriers.  I’ll take them by the numbers:

What really bothers me about the article is the mindset of the author; it seems to be that merely having a pistol is all you really need.  That’s understandable on one level, after all, many defensive gun uses are ended by showing that you’re serious by producing a pistol.  Most bad guys are looking for an easy score, not a real fight.

This is similar to the argument often put forth by the revolver with no sights crowd.  “The average gunfight is 3 rounds from 3 yards and lasts 3 seconds.”  Even if we accept that as gospel truth, they don’t appear to understand that averages are composed of extremes!  Maybe you’ll hit the average, or maybe you’ll end up shooting at a lot longer distance, and need a lot more rounds. 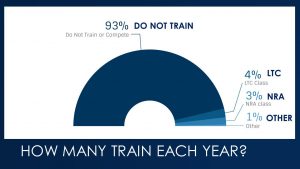 The above graphic makes me sad, as it really shows how most people view their ability, or the innate effectiveness of a gun.  No, of course I don’t expect everyone to spend all their spare time training, but the state mandated minimum is woefully inadequate.

If you’re carrying concealed in order to compensate for something, march on, you probably didn’t read this far anyway.  Printing does matter and we’d all be wise to go to a little extra effort to prevent it.

Want to join the discussion?
Feel free to contribute!

Please log in again. The login page will open in a new tab. After logging in you can close it and return to this page.