You’re wanting a light bearing Sidecar style of holster?  You’re not alone!  They’re quite popular, especially on Instagram.  Before I tell you why I won’t make them, let’s touch on the problems inherent to the fixed design of the married appendix rig.

Adding a light to the pistol adds width.  This compounds the flexing issue, and also adds a new wrinkle: the claw.

Belt claws, sometimes called wings, are designed to rotate the grip in to the body.  It can’t really do that with a Sidecar style as the mag’ carrier side prevents it.  All it’s doing is pulling that side in a little tighter.  The light bearing claw is even worse, as the attachment points have to be changed; this has led to cracking in more than a few instances.  Perhaps those failure were due to a mismatch in user geometry, but as a craftsman who creates products on which the end users’ life may well depend, I choose to sidestep the entire problem by not making it.

Whatever we call them, the married appendix rigs are cool.  There’s nothing wrong with that.  If you’ve been using one with great success, keep doing what’s working!  Do make sure that you’re using quantifiable metrics, and perhaps the best thing you can do to verify that is to take a class from a reputable trainer.

My personal solution has been to switch to a separate holster and mag’ carrier, using the Discreet Carry Concepts clips on both.  This helps reduce the bulk and allow the necessary flex while also being amazingly stable.

If you want to reduce the belt attachments while having the option carry the kitchen sink, consider the Flex, by Phlster.  Yes, he’s a competitor, but he’s a good guy who makes good products.  It’s an affiliate link.  (No extra cost to you.)

Disclaimer: You will get fewer likes on Instagram if you don’t have one of those sexy married rigs.

Here’s my first impressions on the 509. 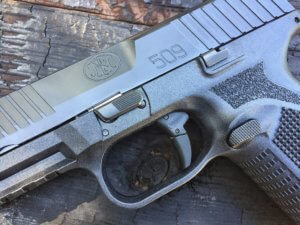 Roughly comparable in size and shoot-ability to a G19.  That’s a good thing.

Trigger is a little gritty on take up especially, but with a very nice reset.  Didn’t notice it while shooting.  Several friends who have one have said that it smooths out with use.  Apex also offers a replacement.  I wouldn’t complain about it for my personal gun, but it’s worth mentioning for the trigger snobs.

Sights are the stock 3 dots, which I don’t care for; I’d like an orange front with blacked out rear, if I can’t just have a red dot. 🙂  I shot it almost as well as I can shoot with an RMR, so it’s not a big complain on the accuracy front, it’s just slower acquiring them when shooting fast.  This was at 7 yards, at a moderate pace, offhand.